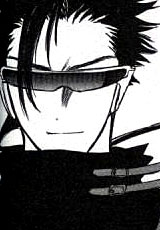 Out of all the characters in all of CLAMP's manga, Zima is the one that comes closest to Fuuma, both in looks and purpose in the story.

Zima is first introduced in the second volume of Chobits. Along with his (aparently) young companion, Dita, he makes sporadic appearances from there on out. Because of the way they are presented, there is a mysterious, ominous air about them, and it is quite easy to jump to the assumptions that they are "bad guys". They sort of are antagonists... or should be, but aren't really. They, along with Chii, are the most advanced persocons created. Zima is a database of sorts, connected to every other persocon in the world, and Dita is his guardian. Their current purpose appears to be to stop whatever Chii is doing/will do... but Zima has a surprise at the very end.

Physically, Zima is practically a clone of Fuuma. In fact, the main difference in their character design is simply that Chobits is drawn in a cuter, more simplified style, while X is sleeker, more elegant and ornate. Zima's hairstyle is pratically the same as Fuuma's: choppy, swishy and somewhat angular; the only difference being the long strand of hair that Zima has at the back, and the fact that his bangs fall only on side of his forehead. Like Fuuma, Zima is tall and tends to stand around looking relaxed yet alert at the same time (except for his tendency lie on his back and nap whenever he gets a chance). He wears shades with one big lense that covers both his eyes, yet still give him an attitude similar to Fuuma's gaze as he stares frm above the rim of his glasses. Zima also wears dark clothes, and his long coat is definitely similar to Fuuma's various exravagant long coats from the second half of X.

Personality-wise, Zima is laid back, playful and very kind around Dita (the only character with whom he really interacts). While there are, of course, other sides to Fuuma, it's a gentleness similar to Fuuma's gentleness, most evident when he deals with Nataku or Kakyou. Like Fuuma, Zima tends to speak cryptically, often saying things that Dita, like Kamui, doesn't fully understand.

But the most striking similarity between Fuuma and Zima is the purpose they serve in the stories they're part of. Zima is the database connected to every other persocon, and thus hasintimate knowledge about each and every one of them; in a way this is very similar to Fuuma's ability to know everyone's deepest desires, because this knowledge means that Fuuma knows the very core of anyone he encounters, in a way he's connected to everyone on earth... not to mention even to the earth itself.

Like Fuuma, Zima is presented as a threat; he and Dita are supposed to stop (destroy) Chii so that she will not be able to bring about a fundamental change to the world of persocons. However, in the very end, Zima stops Dita from attacking Chii (he makes a sacrifice, does something even though it pains him), and we learn that he had a hidden agenda, something not even Dita knew: he wanted Chii to make a choice, to realize something about herself. He wanted Chii to learn to love, and he knew that this would change every other persocon, himself and Dita included. His real goal was to allow Chii to do this, and this was, at least in part, because of his own desire to love Dita. Although Fuuma's ultimate goal, his wish, remains unrevealed, we do know that he keeps pushing Kamui to realize his true wish; we also know, through other characters, and indirectly through Fuuma himself, that once that happens, something will change: the future will not change unless Kamui realizes his real wish. Fuuma, it seems to me, wants that change to occur, just like Zima wanted a change. And lastly, it's my belief that, like Zima's, Fuuma's ultimate motivation is love. 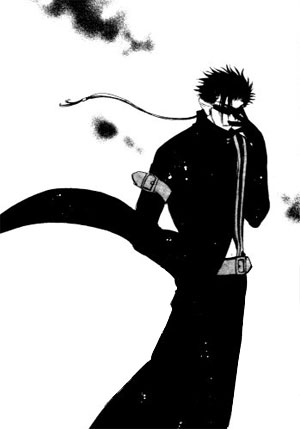