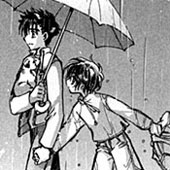 Story-wise, Kamui and Fuuma start out as old childhood friends. Best friends even. Their mothers were also extremely close, to the extent that they call the other's mother "aunt".

...Kamui and Fuuma's relationship has to do with someone whom you thought was your friend undergoing a complete and sudden change.

(Ohkawa Ageha, from a CLAMP interview in Puff magazine. The full translation, by Jamie, can be found here.)

Since Fuuma by this point is all that Kamui has left to tie him to his happy past, he refuses to accept the change in Fuuma, and decides that his one wish is to get the old Fuuma back, no matter what it takes. If we just look at things from Kamui's point of view, no doubt we will come to the same conclusions. However, there is another side to the story, more elusive and certainly harder to understand, but it's there, and it's revealed in Fuuma's words an actions more and more often the further the series advances.

There is a lot of evidence to point at the fact that there is more to Fuuma than what is inmediately apparent, to support the idea that Fuuma is neither evil nor possessed. In regards to Kamui, one has to wonder why, despite hurting him like he does, Fuuma has never killed him. The first time, when he awoke, it was Kakyou's intervention, through Kotori's body, that stopped him. The other times, one could, I suppose, say it was the timely arrival of other Dragons of Heaven. I disagree. Despite the fact that Fuuma himself acknowledges the fact that the two of them are heading for a showdown in which one is supposed to die, I believe there is evidence that Fuuma has his own motives, very different from fate's.

There is, for instance, the way he keeps coming back again and again to Kamui's wish. Generally, he does this after or during a fight. He keeps saying that Kamui will never defeat him as long as Kamui doesn't realize his true wish, and denying that Kamui's wish is what he thinks it is (to bring the "old Fuuma" back).

From all this my conclusion is that Fuuma has a purpose when hurting Kamui: he's trying to get him to react, to realize his true wish (which is what Fuuma has done for other people in the past, with different results). In a sense, just like he awoke, he is trying to get Kamui to wake up now.

As to why he's trying to get Kamui to see the truth... well, on the one hand, I believe Fuuma is one of the only selfless characters in X (selfless as in not selfish, not as in a lack of self). He gives people what they want, even when it pains him to do so. On the other hand, there is the matter of Fuuma's own wish. One of the only things we know for certain about this wish is that the only oe that can grant it is Kamui. My guess is that in order for Kamui to be able to grant Fuuma's wish, he first needs to come to terms with his own true wish.

(Inicidently, when people start thinking about Fuuma's wish, their first assumption is that he wants Kamui to kill him. I don't think this is Fuuma's wish, for various reasons which shall be discussed elsewhere.)

The single most revealing conversation between Fuuma and Kamui is the one they have in the very last published issues of Asuka. In summary, everyone sees a vision (through Hinoto's mind's eye) of Fuuma killing Kanoe (there's more to it than that). Fuuma and Kamui are facing off when this happens and Kamui turns to Fuuma in a rage and asks him how he could do that. In typical fashion, Fuuma doesnt' give him a straight answer. He starts of asking Kamui how he could possibly have killed Kanoe if he's standing right there. Then he goes on to say that people, Kamui included, see only what they want to see, and not the truth. Therefore, if this is what Kamui wants to believe, then it's probably the truth to him. This of course eventually leads into a discussion of how Kamui hasn't yet realized what his true wish is; but the point that I think Fuuma is making (and in fact something he has hinted at in other places, and that characters such as Karen and Subaru have realized) is that Kamui is blind to the truth. He sees what he wants to see, what he needs to see... but he doesn't see the truth, and won't until he lets go of his false wish.

Now, the way I interpret this is that Kamui believes that Fuuma is not himself, and that he can bring the old Fuuma back, because he wants it to be that way, because he cant' face the possibility that Fuuma would willingly do the things he's done, that this is the real Fuuma. Personally, I believe that what awoke was a potential that was always inside Fuuma; however I dont' think it means that Fuuma is evil. I think that rather Fuuma came to realize a lot of things, and that he is willing to do things we view as evil for a purpose.

The relationship between Fuuma and his twin star, Shirou Kamui, is the single most important relationship in X. It's more than important, it's the driving force of the story. What it comes down to, is that the fate of the world rests on these two young, and the way they relate to each other. As such, it's incredibly complex and really hard to pin down. The best person to do so, even if the rest of us may not understand the full extent of what she means, is of course Ohkawa Ageha herself:

But as for Kamui and Fuuma's relationship, it's really not correct to speak of them as "friends". I mean if you look at Kamui, you can tell Fuuma's all he thinks about. He's got no more relatives, no sweet little Kotori, Fuuma's the only thing left that gives Kamui his identity. And when there's that much attachment, it's really no longer a simple "friendship". So when we portray Kamui and Fuuma, we want to do it in such a way that you can see what was once a "friendship" now evolving, transcending that definition.

As to what exactly that might mean... well, a simple yaoi fangirl interpretation might be that Fuuma loves Kamui and Kamui loves Fuuma; but in my opinion that's simplifying it just as much as calling it a friendship. It's hard for me to look at these two character and not think that what they actually are is not friends, potential lovers or even enemies. Fuuma and Kamui are something basic and elemental, they are complementary opposites, the symbol of opposing but complementary forces driving the universe: light and dark, night and day, life and death.

Particularly the notion that all human beings have a sort of "dual nature". You can never really split people up into "good" and "bad", because depending on the circumstances, all people have the capacity for evil. That's how I was thinking when I established this.

At one point, in talking to Kamui about the possibility of "seeing Fuuma again", Kakyou says In everyone, there dwells another self. A gentle heart and a cruel heart. A beautiful heart and an ugly heart. Everyone ... has such opposing hearts. 'The other Kamui' who brought you so much pain is in you as well. I don't think Kamui fully understands what that means, but I think it's fairly safe to say that what Kakyou means is that Kamui is quite capable of doing the things that Fuuma has done. In fact, if Kamui had chosen differently, or maybe, if there had been no twin star to carry the other burden, Kamui would probably have been the Dragon of Earth, trying to destroy humanity. What I wonder, is whether there is still a chance that the roles might be reversed.