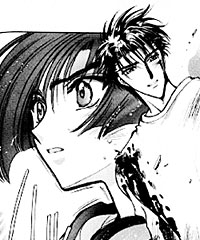 Fuuma's interaction with Yuzuriha is, in my opinion, quite possibly the most intriguing of his dealings with anyone else on the cast. Yes, he tends to be intriguing, and he's never really straight-forward about anything, but in his encounters with Yuzuriha this is taken to a whole newlevel.

What is particularly interesting about it is that, throughout most of their second meeting, Fuuma appears to be behaving rather straight-forwardly as the "Big Bad" set on killing each and every one of the Dragons of Heaven. His manner, for all that he is gentle throughout, can be taken as a special brand of sadism, special when he prepares to strike the killing blow and tells Yuzuriha that he'll put her wish to the test, and that if she trully doesn't wish to die, maybe she won't. A surface reading of what happens next seemsfairly straightforward: Kamui arrives just in time to save her, at which point Fuuma appears to forget about Yuzuriha in favour of hurting/molesting Kamui a bit, until a desperate Yuzuriha finds hidden strength and the new Inuki appears, after which Fuuma decides to retreat, presumably because the odds are no longer in his favour.

Seems perfectly simple, doesn't it? Except, this is Fuuma, and there is nothing simple about Fuuma. Ever.

So let's examine this again: Yuzuriha happens to come across Fuuma on her way back towards Clamp Campus, just as he is setting out to destroy another kekkai (and probably just after a meeting with Kakyou in the dreamscape). Yuzuriha raises a kekkai, alerting Fuuma to her presence and to the fact that she's a Dragon of Heaven. Right from the start Fuuma has the upper hand: from being several buildings away, he's now suddenly behind Yuzuriha, leaning casually against a wall. In my opinion, the fact that he refers to the impeding battle as "playing" shows that Fuuma is well aware that Yuzuriha is in no way a match for him (few people are, afterall). And yet he behaves oddly: he smiles throughout the "fight", not sadistically, certainly not a smirk, but a kind, gentle smile... the smile that reminds Yuzuriha of Kusanagi. What's more: Fuuma really is "playing". He isn't fighting seriously, and Yuzuriha realizes fairly quickly that he's missing her on purpose. In other words, up to this point Fuuma has no intent to kill Yuzuriha. In fact, I would even say that he has no intention of even really hurting Yuzuriha; he could have ended the "playing" by seriously hurting her (like he's hurt, for instance, Kamui), but instead he simply gets her ankle. Enough so that she falters and is unable to run, true, but it's a minor wound by any account.

And then comes the conversation about her wish. "You don't want to die?" he asks (and his body's posture would indicate that he is genuinely curious/interested in her answer), and she replies that she doesn't. "If that is your true wish, you will not die," he tells her, smiling quite cheerfully as he begins to gather energy for an attack; again some people would call his attitude sadistic, but I disagree. I think he is being genuinely cheerful... and that in fact he's actually reassuring Yuzuriha. He asks again if this is her true wish and offers to check it out.

And then of course, Kamui shows up to stop him... but did he really stop Fuuma from killing Yuzuriha, or did Fuuma somehow know that the blow would never land?

As stated before, Fuuma then concentrates on Kamui, and despite receiving a few injuries himself, ends up overpowering Kamui, and taunting him as he twists his arm behind his back and offers to break it.

If the topic at hand was Fuuma's interaction with Kamui, I would talk about the fact that Fuuma is, as usual, not on the offensive at all, and in fact, if his purpose was merely to be cruel and hurt Kamui, he could have done a lot more than break his arm. As usual, I think that hurting Kamui is merely a means to an end. In this particular case, however, it wasn't primarily about Kamui. It was Yuzuriha that Fuuma was trying to provoke.

Yuzuriha has been watching Fuuma and Kamui's fight helplessly, and once Kamui is overpowered, she is anguished that she's incapable of doing anything to protect Kamui (she believes Fuuma is going to kill him). However, the anguish turns to determination, and she decides that she will not let Kamui, or anyone else die. She already knew she didn't want to give up, but now she has the strength to actually act, and because of her rediscovered strength, a new Inuki is born. Yuzuriha doesn't just have the will to live... she has the will and the strength to protect herself and others; and because of what she's been through, she's stronger than she ever was before.

And in large part because of Fuuma.

I suppose someone that disagrees will probably say that there is no real evidence that this was Fuuma's purpose. That she did it herself and that she did it in spite of Fuuma's taunting and that she ended up intimidating him enough to leave Kamui alone for the moment. But come on? Fuuma, intimidated by Yuzuriha and the baby Inuki? For all her newfound strength, Yuzuriha is hardly a match for Fuuma. Yes, she got in a blow... but Fuuma is so powerful that he could easily have overpowered her again. If he chose to leave at that point, it was because he had his own reasons.

Your desire of 'not wanting to die' seems to be genuine.

Fuuma's parting words are what turn the "obvious" interpretation (Big Bad being sadistic) on its head. He doesn't vow to finish what he started with Kamui another day, he doesn't curse Yuzuriha for interrupting. He goes back to the original question between himself and Yuzuriha: does she truly not want to die? Does she truly want to live? Like I said before, Fuuma appeared to be really interested in finding out the truth... except that since he can see everyone's deepest wish, he would already know if it was true. So why did he need to test it? The logical answer is, he didn't; what he meant all along was for Yuzuriha herself to know what she trully wished for. And he did exactly what he set out to do.